Rezi is condemned, bound by tradition, to serve the king through the afterlife. She and all of his household are buried alive with him in his massive tomb, but underground, the veneer of society begins to crumble as the household divides into factions. There are those who seek to escape, those who seek to control, while others seek only to destroy. Rezi must navigate all of them if she is to survive and and find a way out from Below.

So, a major element of the story I present in Those Below is the concept of people mummified in bags and buried in the earth.  This is actually something that I pulled directly out of history.  The Peruvian and Bolivian mountain peoples have a long tradition of creating mummies in this fashion.  Unlike Egyptian mummies, where the bodies were embalmed, laid out straight and sealed in a sarcophagus, Andean mummies were made in a manner similar to what I describe in the book (Minus the ritual which I made up).  The body was arranged in the fetal position, usually with the hands and feet bound to hold them in place.  It was then treated with preserving/desiccating agents and wrapped in several yards of cloth, ending with the final covering (Bag) as I described.

Though the techniques varied quite a bit, the general concept was the same preserve the body through desiccation (Drying) in order to honor the dead and help them in the afterlife.  This practice was essential to religions that practiced ancestor worship, which a wide spread practice in the ancient world.  In South America, several cultures, many of whom predate the Inca, actually created vast underground chambers where they would store the sacks and frequently visit them.  In these instances they would use sticks with feathers and bits of cloth to identify the sacks similar to what I described in the story.

I was very fortunate during my last visit to Lima to see a complete recreation of one of these sites in one of the national history museums.  The exhibit was very well done, and actually contained mummies that had been recovered for archeological sights.  What impressed me the most was the bright color of the sacks themselves which included bright reds, yellows, and even greens and blues.

In several later cultures, including the Inca, mummies became very important as totems.  Animals and people (especially children and infants) were often sacrificed, mummified, and buried prior to building large monuments and settlements and as offerings to appease spirits associated with nature, such as volcanoes.

To Learn More Check Out:

These Are Pictures That I Took While in Peru of the Mummy Bags: 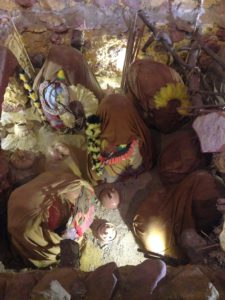